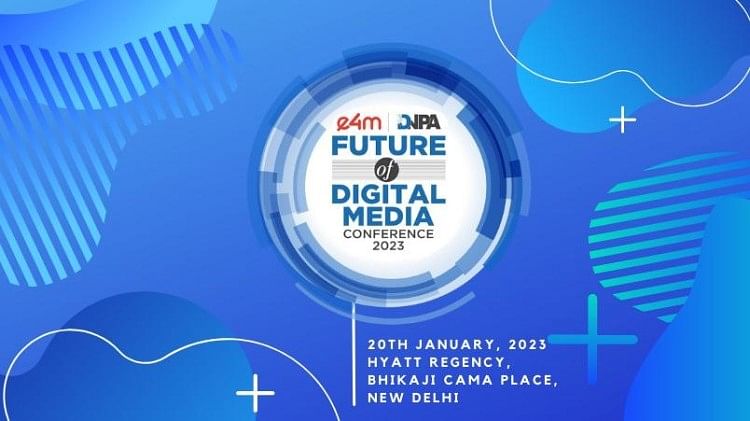 LIVE DNPA Conference 2023: The conference of the Digital News Publishers Association (DNPA) is being held in Delhi on Friday to discuss new technologies, and regulatory and policy challenges coming in the field of digital media.

Its theme is ‘Future of Digital Media’. More than 40 experts will speak throughout the day on this topic and shed light on the relationship between big tech companies and digital news media publishers.

The one-day conference is being attended by experts from across the globe, Indian digital media giants, and other partners. The first Digital Impact Awards will also be given in the evening.

Among the digital platforms selected by the jury for the award, the Central Government’s Health Ministry’s Covin app, e-governance portal, and GST portal are prominent.

Paul Fletcher and Union Minister Chandrashekhar will give the keynote address

The keynote address at the conference will be from Paul Fletcher. Fletcher has been Australia’s communications minister. During his tenure, such a law was enacted in Australia, due to which it is now necessary for big tech companies there to share income with digital news publishers.

He will explain the background of this legislation and present his perspective on it. In the evening there will be a special address by Union Minister of State for Electronics and Information Technology, Rajeev Chandrasekhar.

‘Became the first choice for digital people during the Corona period’

Dr. Anurag Batra, Chairman, and Editor-in-Chief of Business World and Exchange for Media said, ‘During the Corona period in the last three years, digital became the first choice for the common people.

It has ensured that good content reaches people, be it in text form and in audio or video format. Alan Musk has also said that there is no other country like India in the world. Print media also faced many challenges during the Corona period. The most important challenge among these is the increase in the cost of newsprint.

However, there was no problem in terms of revenue, as the revenue has increased continuously during the last 12-15 months.

The readership of newspapers has also increased. Newspapers remain the first choice of the people even today. Newspapers like Hindustan Times and TV broadcasts like ABP are doing consistently well. On the other hand, Hindustan Times is doing very well in terms of digital.

The DNPA aims to help digital publishers move forward so that they can formulate the right policy. Today’s conference is a small step in this direction. I hope that the DNPA conference will be organized every year on a much bigger scale.

Dr. Anurag Batra said, ‘This year e-forum is being started under DNPA. Along with this, Digital Governance Awards will also be given. The winners of these awards in different categories will be announced this evening, which will be decided by the jury members.

DNPA is Delhi based organization. Digital units of 17 leading news publishers in the country are part of this organization. The organization is a nonpartisan body that promotes equality and fairness in the digital environment between news organizations and big tech companies.

Digital Impact Awards will be given in these eight categories

The objective of the Digital Impact Awards is to encourage innovation in digital technology that improves the lives of citizens and promotes nation-building. Through the ‘Exchange for Media – DNPA Impact Awards 2023’, such innovative digital initiatives have been honored through which citizens are getting quick services in different sectors. Awards will be given in these eight categories.

DIKSHA is a digital infrastructure for knowledge sharing. It has been selected for the best use of the digital medium for the purpose of human resource development and education. This platform works under the NCERT of the Ministry of Education.

Co-WIN is the digital foundation behind the vaccination drive in the country. It has been selected for the best use of digital media for the purpose of health services. This app operates under the Ministry of Health and Family Welfare.

This is a game-changer scheme for financial inclusion. It has been selected for the best use of digital media for the purpose of financial reforms. The scheme operates under the Department of Financial Services, Ministry of Finance.

CAMPA is the e-Green Watch Portal. It has been selected for the best use of digital media for the purpose of sustainable environmental protection. This portal works under the Ministry of Environment, Forest, and Climate Change.

It is a national portal providing single-window access to information and services provided electronically by the government. It has been selected for the best use of digital media for the purpose of Ease of Business. This portal works under the Ministry of Electronics and Information Technology.

6B. One Country One Ration Card Scheme

The GST portal works under the Department of Revenue, Ministry of Finance. One Nation, One Ration Card scheme works under the Ministry of Consumer Affairs, Food, and Public Distribution. Both of them have been selected for the best use of digital media for the purpose of governance and administrative reforms.

Both these apps have been selected for the best use of digital media for the purpose of reforms for women and child welfare. The Poshan Tracker app works under the Ministry of Women and Child Development and the Himmat app works under Delhi Police.

DigiLocker has been selected for the best use of digital media for the purpose of Ease of Living. This portal works under the Ministry of Electronics and Information Technology.

Uunchai Box Office Collection: Audiences are breaking down at the box office to see the friendship of Amitabh, Anupam and Boman!