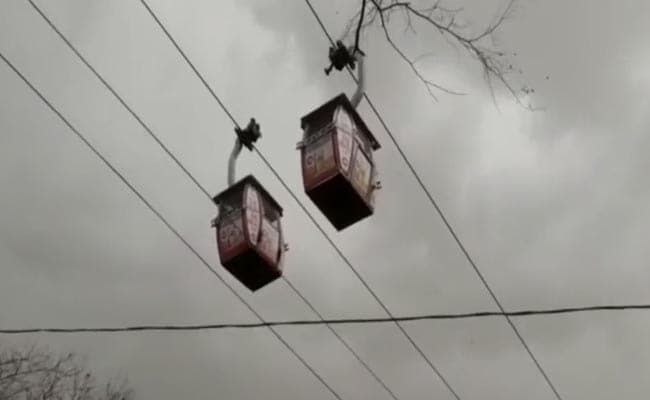 Satna, Madhya Pradesh: It was a tense half an hour for about 30 devotees visiting the famous Maa Sharda Temple in Madhya Pradesh’s Satna district on Monday afternoon. The cable cars were ascending the hillock in had come to a halt after heavy rain and strong winds caused a power cut.

A bone chilling video, shot from the ground, about 100 feet below, showed two cable cars – next to each other on parallel cables – swaying left to right like a pendulum in heavy, howling wind.

Reports suggest seven cable cars, with four passengers in each, were stuck.

It took 30 minutes for power to the ropeway to be restored, following which the devotees were safely rescued.

“We were scared for our life. We thought we would die, but are now relieved,” said a devotee after being rescued.

Last month, in a tragic ropeway accident in Jharkhand’s Deoghar, five people died and over 30 were injured when two cable-cars collided mid-air leaving tourists trapped for about 40 hours. The rescue operation was carried out by the Indian Air Force, the Army and the National Disaster Response Force or NDRF.