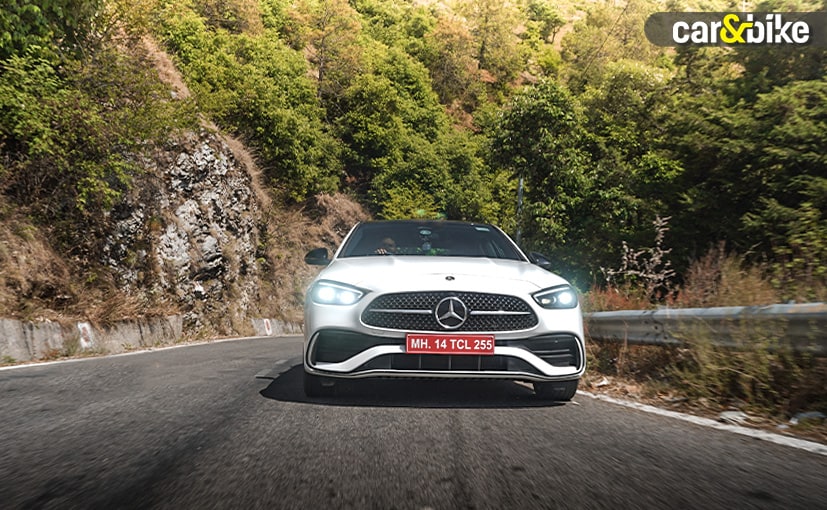 The Mercedes-Benz C-Class goes back several generations to 1982 when the W201 or ‘Baby Benz’ took birth. Its success saw the creation of the C-Class model line in 1993, and five generations later we have the W206. Legacy is a wonderful thing to have in the automotive context, and the C-Class has a very strong lineage.  The outgoing model has been very successful for the company – even winning the 2015 World Car of the Year title. After being missing for a few months, the Mercedes-Benz C-Class model line is back in the Indian market. I am in the Queen of the Hills – Mussoorie to test the new Mercedes-Benz C-Class to see if it maintains that strength – or better yet, tops it. This is one of the most important models for Mercedes-Benz in the country, with over 37,000 units sold since 2001. It takes on heavyweights like the BMW 3-Series, Audi A4, Volvo S60 and the Jaguar XE.

The C-Class comes to us in two trims – AMG Line and Avant Garde – and the former gets two-tone AMG alloys, a sharper bumper and diffuser and the star-studded front grille

Mercedes-Benz has been knocking it out of the park over the past few years on styling and exterior design. The new C-Class is no different. The Sensual Purity design language gives us a very good looking car, with the edgy and aggressive face seen off late in the new C-Class, and with the flanks and rear of the S-Class. Any likeness to the latter model is purely intentional, as this is indeed meant to be a ‘baby S-Class’. The car comes to us in two trims – AMG Line and Avant Garde. The AMG trim gives you two-tone AMG alloys, sharper bumper and diffuser, and that sexy star-studded front grille. AMG badging is to be found all over as you’d expect. The Avant Garde trim also looks good though, and the car maintains an elegance that chauffeured owners, in particular, would love.

The new hood, with its power dome, adds sportiness to the C’s look. The focus of the design is to enhance the sporty appeal, and look wider and more ample. The split tail lights, dual exhaust and neat shut lines make the car look swanky. On the C300d, you get a dual exhaust, while on the C200 and 220d – there is a faux twin exhaust pattern built into the lower part of the bumper, just like in the previous car. I will get to interior design and layout a bit later.

The three variants in India are the C200 petrol, and two types of diesel – the C220d and the most powerful diesel in the segment, C300d – which incidentally match the specs of cars a segment higher. Today I am testing two of them. The C300d uses the same engine block as the C220d but with way more power at hand. 0-100 kmph takes a mere 5.7 seconds and the car’s top speed is 250 kmph. And it is one of the cars with me. The one I don’t have is that 220d which also has pretty strong numbers. It also now has the claim of being the most fuel-efficient car in the Mercedes-Benz India lineup with a 23 kmpl mileage figure – impressive for a car of this segment. And finally the C200 – the sole petrol offering. Don’t be fooled by the displacement alone, since the car’s power and torque are substantial. All three engine options get the 9G-Tronic gearbox as standard. All three also get the ISG or integrated starter generator, a 48-volt mild hybrid system. The electric motor offers up to 15 bhp of extra power and a substantial 200 Nm of peak torque. The idea is simple, the system kicks in to ease the load on the engine in start-stop situations and provide the extra juice needed in dynamic or even cruising situations. This gives the car optimum efficiency.

The C 300d packs some impressive numbers on the spec sheet and the car is a lot sharper. It’s obvious the dynamics have been worked on

With the W205 the C-Class had already become way more dynamic and sportier. With this generation, change has happened once again. And that’s a good thing because a lot of times with the C, driving enthusiasts were kind of left out in the cold. The other good thing about the car is that the extra enhancement in the wheelbase kind of shows up in the back. It doesn’t feel as cramped as it used to but right now let me focus on driving the car. I have begun my drive on the C300d. The car’s ample figures on paper translate to actual performance on the road – straight off. The car’s handling is a lot sharper and it’s obvious the dynamics have been worked on. It makes the car feel a little more enthusiastic. The C300d gives you more power and all 260 horses come out to play! The new C-Class feels like a more agile, and more balanced car. The C300d in particular feels sharp, and though the motor still suffers from a touch of lag, the overall refinement levels are superb.

You get the usual drive modes – Eco, Comfort, Sport and Individual – and a new button access dynamic button at the base of the touchscreen that lets you change through them. On the sport mode the car’s 12.3-inch digital cluster takes on a sexy, red-themed look. And the graphics to show revs are way cooler than a regular tacho. The ride quality on the new C is pliant, but not too soft. The suspension does get a good workout on hard-edged bumps which can travel up to the cabin. Regular undulations and potholes are dismissed with sheer nonchalance. The steering is also stiffer than before, and more precise – making driving enjoyable.

The C 200 is expected to see more demand with the latest generation and the EQ Boost really gives the small 1.5-litre turbocharged petrol motor a lot of punch

Now let’s move on to the new C200 – the sole petrol variant. This is an important variant as the market continues to shift towards petrol anyway. With the last car, it was about 25 per cent of sales, but with this one, the expectation is that it may move to half of the car’s expected sales. The bigger question for me though – was all about how the car’s 1.5-litre engine does on the road. The good news is that it does just fine! While its numbers are strong enough as is, the EQ boost I talked about really gives the C200 a lot of punch. And that’s because while you get a little extra power, more significant is all that extra torque you get – 200 Nm of extra torque, which makes things a lot more fun, and the car a lot more responsive.

The C-Class runs MBUX 7NTG, while the model also gets a host of ADAS features including automatic emergency braking, park assist and more

Technology plays a huge role in the new C-Class, it has something called Car-to-X, which we saw that on the S-Class as well. Basically, what it means is that all the cars which use MBUX interface, talk to each other through the cloud and they are constantly relaying information. Everything, from a sharp curve ahead to maybe a broken road surface, some kind of a traffic anomaly, even a pothole! Car-to-x alerts work on all Mercedes-Benz cars with MBUX interface. But only cars with the latest NTG7 version of MBUX can relay information to the cloud and therefore to other cars. The information has a 24-hour life since most situations would be temporary. The C-Class gets that latest MBUX. And of course the MBUX assistant is every ready to help. We will have a separate tech review on the car anyway. Now besides the MBUX 7NTG, you also get a whole host of ADAS features on the C-class including automatic emergency braking, park assist, etc. The C-Class also gets the Mercedes staple of ‘pre-safe’ and has 7 airbags. It also promises exemplary levels of crash safety. But none of this is a surprise anyway in this segment.

The centrepiece is the new vertical touchscreen angled towards the driver, measuring a generous 11.9-inches

The theme of tech carries through in every aspect of the C-Class. And in the cabin, it’s also all about luxury. The overall layout is completely new, and the centrepiece is the new vertical touchscreen angled towards the driver, measuring a generous 11.9-inches. Like most modern premium cars, the touchscreen has almost all in-car controls and therefore, giving the dashboard a clean, sophisticated look. Another highlight is the HD instrument panel, with different themes and settings. The touchpad controls on the steering are now more flush. The left side lets you control the touchscreen, and the right side is for the instrument cluster. And they work at the flick of a finger – It’s the same for the volume control.

The legroom is substantially more on the new C-Class, while the highlight on the C 300d is the Burmester 3D sound system

The sunroof control is also similar with just a touch-sensitive panel rather than a switch or lever. A fingerprint recognition system lets you carry your profile into the car – which recognises your music, connectivity, climate control, seat, mirror, and ambient preferences. The layout is very swish, and the materials used look fabulous. The interior has a few colour options, but this two-tone Sienna brown and black combo on the C300d is a new addition; and it looks pretty great. No seat ventilation though, overall legroom at the rear has really got better. You get the Burmester sound system, ambient lighting, a connected car telematics suite that works with the Mercedes me app, wireless charging, wireless Apple CarPlay and Android Auto, and either Alexa or Google home integration.

You can now lock the car by pressing the Mercedes-Benz logo on the keyfob, similar to what another German automaker has been doing for years

But there’s one more thing I have to mention here and has to do with the key fob. What’s new about it? Well, unlike in the past when there was a lock button on it, now you can lock the car by pressing the logo. It certainly reminds us of another German carmaker who has had that for years. any guesses?

The new-generation C-Class is expected to be pricier than the outgoing version and despite that, we do think it will be the most successful yet in India and the world

Prices of the outgoing C-Class begin at nearly ₹ 50 lakh and I expect the new gen to be a bit pricier. Expect these variants to start at just over ₹ 50 lakh, and top-off above ₹ 60 lakh. The competition cars all stay below ₹ 50 lakh ex-showroom – for both fuel types, and so that will play heavily on Mercedes India management as it sets pricing.

Loads of tech inside out, sexy design, sophisticated S-Class like interior, safety, connectivity, and multiple powertrain options make the new Mercedes-Benz C-Class quite a winner. The model is a worthy addition to the hallowed C-Class lineage, and will likely be the most successful generation yet, in India, and the rest of the world!