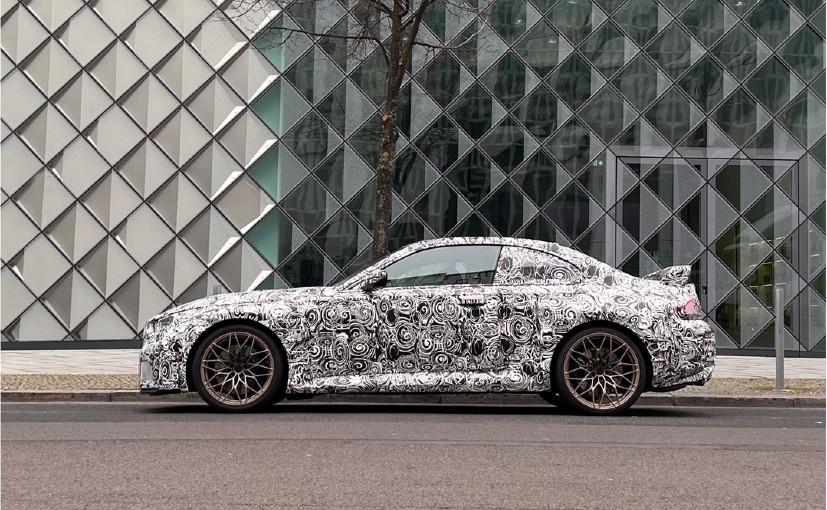 The baby M is scheduled for unveiling at the 2022 Goodwood Festival of Speed set to take place between June 23-26, 2022.


The 2023 BMW M2 teaser was shared on the brand’s social media handles
BMW has dropped the official teaser for the next-generation M2 that will make its global debut later this year. The baby M is scheduled for unveiling at the 2022 Goodwood Festival of Speed set to take place between June 23-26, 2022. The second-generation BMW M2 will be positioned below the M4 coupe in the company’s line-up and will mimic the new 2 Series in design albeit with the M treatment thrown in for good measure. The teaser gives a glimpse of what we can come to expect from the little performance coupe.

The camouflaged teaser image of the next-generation BMW M2 reveals the long and arched nose at the front, while the side sills appear more prominent. The rear fenders appear more pronounced on the car with what appears to be a rear wing sticking out the back. Previous spy shots have also revealed twin exhaust tips on the upcoming M2. There was also a test mule with quad exhausts in the centre of the bumper. The alloys deserve special mention and are finished in a star-shaped bronze colour.

The upcoming BMW M2 is likely to draw power from the 3.0-litre straight-six, twin-turbocharged petrol engine tuned for about 450 bhp. While an automatic gearbox is a given, speculations suggest that a manual gearbox just might be an option on the offering. BMW has already confirmed that the 2023 M2 will be assembled for the world exclusively at the automaker’s San Luis Potosi plant in Mexico. The model is scheduled to hit the assembly line “at the end of 2022” and will be produced at the facility alongside the 3 Series and 2 Series Coupe. The addition of the M2 will also require hiring an additional 800 employees at the plant, BMW previously said.

The 2023 BMW M2 is expected to make its way to India but could arrive only as a Completely Built Unit (CBU). It’s also likely that India will only get the top-spec M2 Competition. The first-generation M2 has been a big hit with the enthusiasts globally and the new version will indeed have some big shoes to fill.