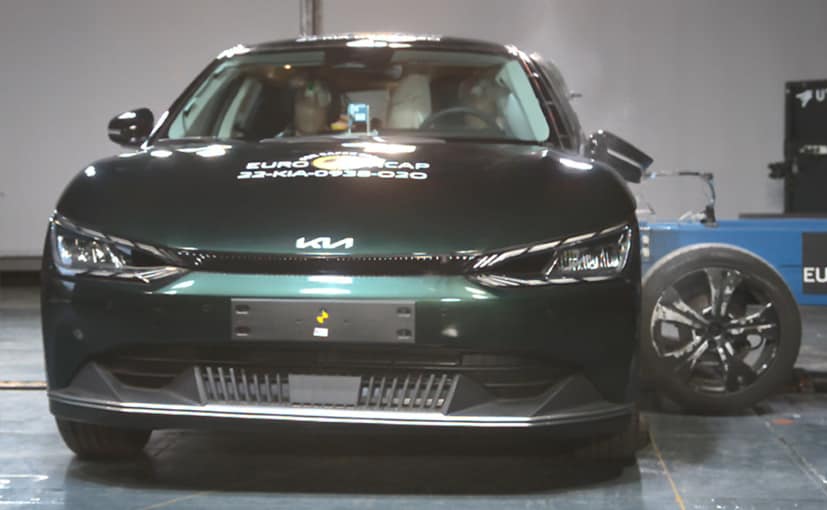 The Kia EV6 has been crash tested by the Australia NCAP (ANCAP) and the electric crossover scored a full five star safety rating. The all-electric offering scored 34.48 points out of the available 38 in adult occupant protection and 42.96 points out of 49 in child occupant protection. The tests further concluded that road user user protection was rated at 64 per cent while safety assist features were at a high 88 per cent. The announcement comes just days before the model is set to go on sale in India and further adds to the strong suits of the offering. Do note, the Global NCAP crash test programme is different from the Australia NCAP test programme. ANCAP conducts a full front offset test, full width frontal test and a side impact test.

ANCAP stated that all single and dual motor variants of the Kia EV6 were covered by the five-star safety rating. The passenger compartment remained stable in the frontal offset (MPDB) test. Dummy readings for the driver indicated marginal protection for the driver’s chest and lower legs. Meanwhile, dummy readings for the front passenger indicated adequate protection of the lower legs. The test results further concluded that protection good for all other critical body regions for both the driver and passenger.

In the side impact test and the oblique pole test, the EV6 offered good protection to all critical body regions with the car scoring maximum points. The centre airbag also helped protect against occupant-to-occupant interaction in side impact crashes and provided good protection for the head of both front seat occupants. The far side impact tests also saw minimal excursion, wherein the occupant moves from one side to the other side of the vehicle.

With respect to child occupant protection, the Kia EV6 offered good protection in the frontal offset test for six and 10-year-olds. The side impact test saw the head of the 10 year dummy receiving marginal protection, while the bodies of the dummies was rated as good. The EV6 comes with ISOFix anchorages and top tether anchorages for all rear seating positions.

Launched in Australia and New Zealand in February this year, the Kia EV6 comes equipped with dual front and curtain airbags as standard. The centre airbag provides protection to front seat occupants in side impact crashes across all trims. The electric offering also gets electronic aids with ADAS and this brings Autonomous emergency braking, lane support system with lane keep assist (LKA), lane departure warning (LDW) and emergency lane keeping (ELK), and an advanced speed assistance system (SAS) as standard. The EV6 is sold with the 58 kWh and the 77.4 kWh battery options in Australia with single and dual motor configurations.

The Kia EV6 arrives in India in the RWD and AWD options with the 77.4 kWh battery pack. It will be available exclusively in the GT Line with all the bells and whistles. Bookings for Kia’s first electric offering in India are open for a token of ₹ 3 lakh, while prices will be announced on June 2, 2022. We got to drive the new EV6 late last year on international roads. You can read about our exclusive drive here. We also got to sample the EV in India as well at the Buddh International Circuit. You can read the review of the India-spec car here.