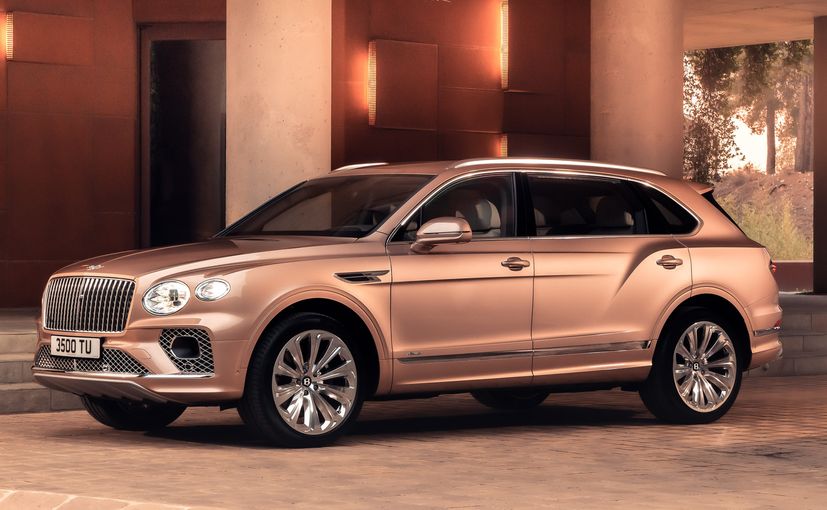 Bentley has revealed the fifth model for its line-up, the Bentayga EWB (Extended Wheelbase). As the name suggested, this is the long-wheelbase iteration of Bentley’s popular SUV offering 180mm of additional rear-seat space to owners. All that additional space comes courtesy of a 3,175 mm wheelbase – up the regular Bentayga’s 2,995 mm. Aside from the larger dimensions, the Bentayga EWB gets a number of mechanical upgrades over its standard counterpart along with an enhanced rear-seat experience.

Bentayga EWB gets a 180mm longer wheelbase with the added length all used to improve rear seat space.

Coming to the design, the Bentayga EWB gets only some subtle differences from its smaller sibling. The most obvious is the longer rear door which highlights the model’s positioning as a chauffeur-driven SUV. The other is the grille and 22-inch alloy wheels. The mesh design piece of the regular Bentayga is replaced by a vertical vane grille while the alloy wheels – of a similar design as on the standard Bentayga – now get a polished finish.

Vertical vane grille one of the subtler identifiers of the Bentayga EWB.

Moving to the cabin, the Bentayga EWB gets the option of three seating layouts – the standard 5-seat layout, a new 4+1 layout featuring a central jump seat between the rear chairs or the more luxurious four-seat layout with individual rear seats.

The seats to talk about though are the individual “Airline Seats” that Bentley offers for the second row. The seats can be electrically adjusted in 22 different ways, can recline by up to 40 degrees with boss seat also getting an extending leg rest. Also unique to the rear seats is a seat climate control function that works according to the occupant’s body temperature. Sensors in the seat read the occupants’ body temperature and surface humidity and automatically adjust between seat heating, ventilation of a mix of both to provide optimum comfort. The seats are also capable of sensing the occupant’s seating pressure points and make micro-adjustments to the seating position for improved comfort.

Rear passengers get unique seat climate control function that adjusts between heating and ventilation  based on the occupants body temperature and surface humidity.

Buyers can also option on power closing rear doors – a first from the company, heated rear door and centre armrest and a unique LED ambient lighting pack that hides LED elements behind perforated diamond patterns in the door pads. The Bentayga EWB also gets a vast array of trim and upholstery options to spec from – Bentley says that buyers have 24 billion different trim combinations to choose from.

Bentley says the Bentayga EWB gets 24 billion different trim combinations to choose from.

Under the skin, the biggest news for the Bentayga EWB is the rear-wheel steering system –  a first for the Bentayga. Bentley says that the system not only makes the large SUV feel agile but its turning circle at 11.8 metres is even tighter than the regular Bentayga. Also standard is the 48V active anti-roll system found in the standard Bentayga.

For now, the Bentayga EWB will only be available with a 4.0-litre twin-turbo V8 petrol engine developing 542 bhp and 770 Nm of torque. The unit is paired with an 8-speed automatic gearbox with Bentley claiming a 4.6 second sprint time to 100 kmph and a 290 kmph top speed.